Skip to content
Home > UI > Don’t make me think vs don’t think about it
Published November 18, 2014 by holgerleichsenring

Don’t make me think vs don’t think about it

I believe it was five years ago when I was sitting in a plane with a printed version of Don’t make me think. This book from Steve Krug from 2000 can be considered as kind of benchmark. 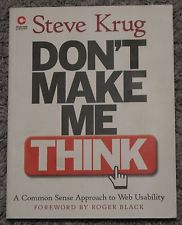 When I read something about it I was impressed by two things:

Then I did exactly that: I read it on the flight. And was much more clever afterwards. Okay, I believed I learned something :-). And I really did. When you don’t think different about the creation process of web sites and user interfaces then you should just read it again. When that doesn’t help… mmmh. Let me know about it, I am curious.

This term “Don’t make me think” comes to my mind every time I see an user interface or web site that makes me search, that doesn’t give me the possibility to act, to solve the issue, find the action I want to take.

Whenever I fix things in legacy code, it hits me. Every single missing abstraction comes up and moves screws you never knew that they were there.

Come on guys. Stop don’t thinking about it.

Always code as if the person who ends up maintaining your code is a violent psychopath who knows where you live. And imagine what the users would do, if they knew.

Don’t make anybody think. Make your life easy. Think about it.