Skip to content
Home > SOLID > What’s wrong with that: I am not that good in naming classes
Published March 9, 2016 by holgerleichsenring

What’s wrong with that: I am not that good in naming classes

Quite a while ago I was sitting together with another programmer to review the brand new sources. It was created as a prototype, a proof of concept. The original product has been rewritten for several reasons:

Yes, certainly if there would have been proper abstractions of the logic there wouldn’t be the need to rewrite it from scratch. But in this case, from the business and the technical point of view it did make more sense to just drag out the logic how all that stuff had been done in the “old” version and create a new one completely rewritten.

Going through the code, I’ve seen these classes: 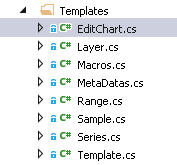 So there is a templates folder with classes that sound like models aka PONOs to me. Certainly being part of the review session, opened these files and was pretty surprised that there is a lot of functionality as well as data definition within these classes.

Yes, it didn’t compile on my machine, as you may recognize. Not that problematic as it anyway was rewritten completely. Anyway it wouldn’t have made me more happy because it would have been compilable :-D. I was missing some 3rdparty libraries like DevExpress.

So why it is heavy to find a name? This should be pretty obvious when watching this code. Most importantly – and hopefully not too surprising – the name of the class should be derived by its tasks.

Having a look onto that code base, the questions are not necessarily sensible. This class just does too much, takes decisions, opens connections, uses globals from Excel does some magic things with “constants” and dialogs.

It has a try catch block that catches my recognition. What can be done with that codebase to catch exceptions properly?

Okay, pretty frustrating. Just a finally, setting back some global variables for Excel.

What’s wrong with that beside the naming?

Stopping here, otherwise this is going to be a rant.

Just a final word about prototypes: I didn’t understand why most of the programmers start to program “quick and dirty” when the task is to create a prototype or a PoC.

Why is it a good idea to mess up every straight and well proven strategy when programming something that is subject to prove a certain thing?

Don’t tell me, you are faster. May be you put out some lines of code faster. But if there is no single thought about architecture, this is not going to be dirty, but just bad. These strategy never helps. I always, always apply the same strategies. This doesn’t take more time. It makes me faster.

And there is an additional benefit: The code is always reusable. So after the prototype, there is no need to start from scratch.