Coding principles: The difference between defensive and offensive programming

I put together a list of strategies, rules and best practices for our team. This is not any unusual stuff, but (IMHO) a sensible and smart set of rules to follow to be able to write extensible, maintainable, understandable, testable, robust,… *TooManyAdjectivesException* …code. To follow the evolution of methodic and what are the coding principles we do follow have a look at Evolution of methodic.

Have a look onto that part of the rules. I did put it together in a powerpoint – yes, the most beloved tool of every developer. 😉 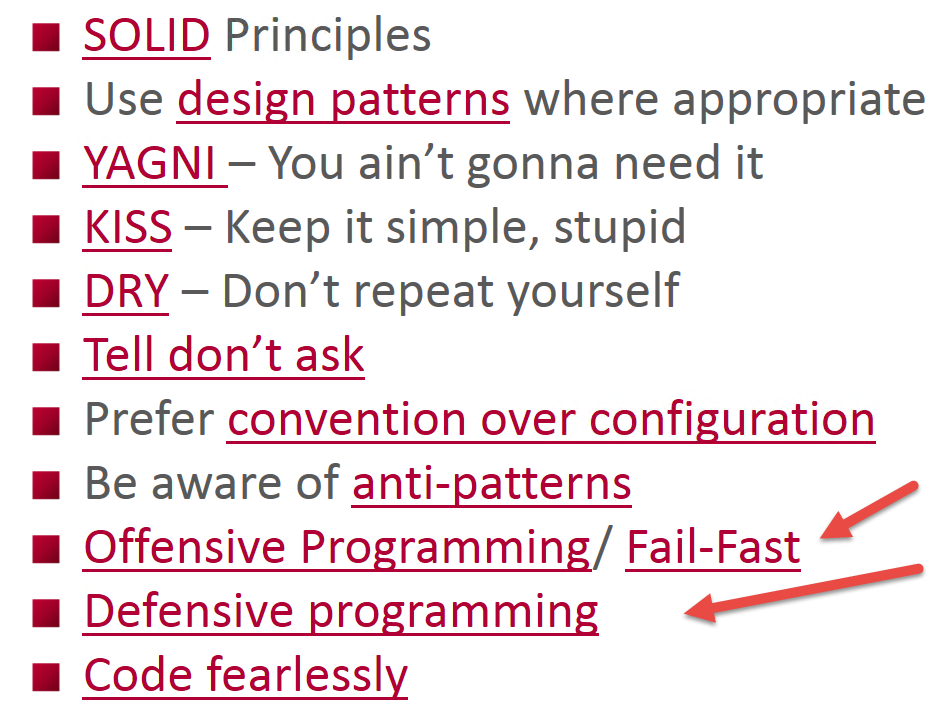 So how can we be defensive while being offensive? Isn’t that paradox?

No, it isn’t. Let me tell you my understanding of both principles. You may want to add your 5 cent when you disagree.

What does make the developer being defensive? Hold back anything? Don’t do the full story? Try to get rid of the feature when the product owner talks about it? There is a wiki entry about defensive programming. This definition doesn’t go far enough and partly goes into a wrong direction from my point of view:

Let me put my set of rules of being defensive. Let’s say the developer has to implement a certain feature:

The offensive programming is more easy to describe due to it is a way shorter story.

From my point of view, offensive coding/ fail fast is part of defensive coding. Nevertheless, both needs to be mentioned.

You can consider the defensive developer

This is exactly the type of developers we need.

Are you one of them?