Skip to content
Home > Uncategorized > Do you start with the data or with the test?
Published January 16, 2017 by holgerleichsenring

Do you start with the data or with the test?

I recently had some discussions about TDD. I personally never tried to accomplish the procedure seriously. So I wanted to invest a little time to understand if it does fit to my needs, especially if it is more effective in short and long term perspective.

I wanted to use a simple example. Not too complex and not too simple. There are some pretty good samples for exactly that purpose, implementing small solutions at Clean Code Developer: Coding Dojos. It is unfortunately in German, so you may want to use online translation to get the picture.

I selected an example because the task seems simple, but there is some serious work to do with the data that is going to be handled: Bank OCR. Let me shortly explain the task in question. It is certainly not about  “real” OCR recognition. This would go much too far. It is simple, but nevertheless leaves some room for sensible problem-solving strategies. Actually all these tasks on that web site are made exactly for this. It is not about the best code ever written. But

Let’s go into the details. Btw, if the explanation takes too long, you may want to have a look onto the results in clean code developer samples in github.

The base of the program is an ASCII input file. The file shall look like the following: 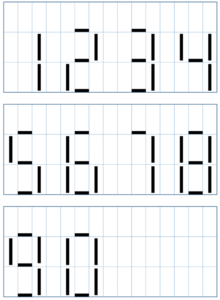 Every number occupies three lines and three characters in a row. Visualization of charaters are done by spaces, pipes and underscores. Between every single character there is a space, expect the last character in the row. There it ends with an carriage return.

The program shall be an executable that takes as the only argument the name of the file.

In the first run, the file will only have valid numbers, in the second run, it should show per line at least one character was invalid.

The file name of the assembly is obviously therefore also specified and there are multiple rows.

The start of all thoughts is always the data.

Sitting in front of the screen thinking about the problem was my first task. This is how I always approach a problem. I don’t code, just thinking. The start of all thoughts is always the data. Consider that to be my comfort zone. It doesn’t work better for me thinking in classes and starting with an obvious “OcrProcessor” class.

You may want to think shortly about it and go on after it to be able to compare your thoughts about the data with mine. Let’s start:

To wrap up, have a look into the data class I wrote at first. See full file.

With that thoughts in mind, and actually with all four data classes in place after some minutes, I can start the implementation.

Considering TDD, I guess I did something wrong. I did not write the test at first and let it fail. Anyway I now have a very good idea what is going to be accomplished. But wait. Can I? No, I don’t know what to write right now. Again I sit back and think. Which components do I need?

I do sit back and think about the solution before I start to code. Always.

Considering my data classes – where you can argue if it is really necessary to have the post fix “Model”, guess this is some kind of philiosphical question or a matter of taste – I obviously need functionality that fills that models will life.

I immediatly started to write the code and found myself writing the LineReader first. As this fills up my base data classes it was quite natural to start with it. 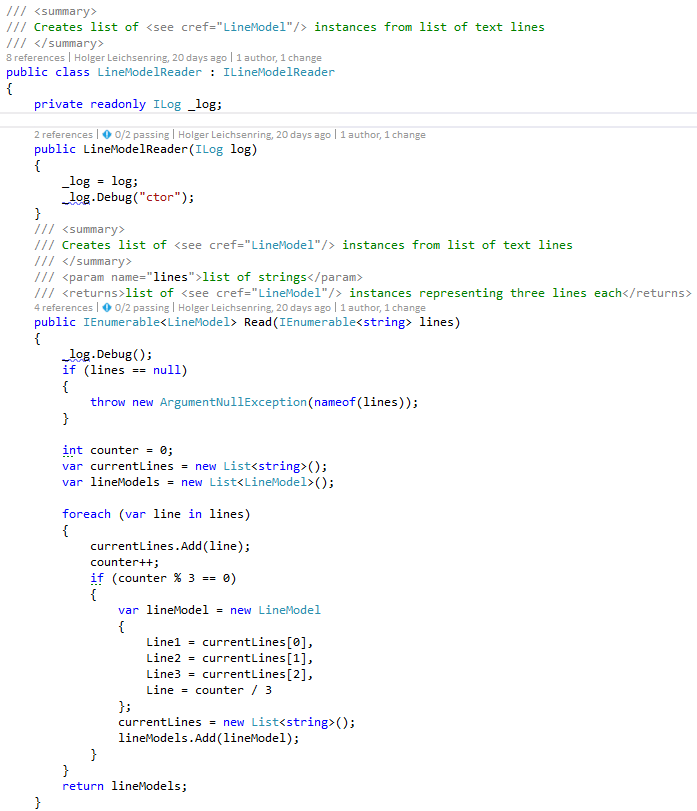 As you may recognized I use dependency injection with Windsor Castle. You may want to have a look onto the following articles to get a deeper understanding how the coding looks like:

This function is pretty straight forward and due to it is very small hard to do any mistakes when writing it. This is one of the main goals to separate each problem to really small ones. Most of the code is just written and works pretty much directly.

The class just takes over a list of strings and create a model with three lines also adding the information about the current line. It certainly doesn’t check for uncomplete models, as this is still a simple sample and doesn’t need to be 100% complete and defensive.

Next functionality shall take over the formerly created classes and create CharacterModels out of it. 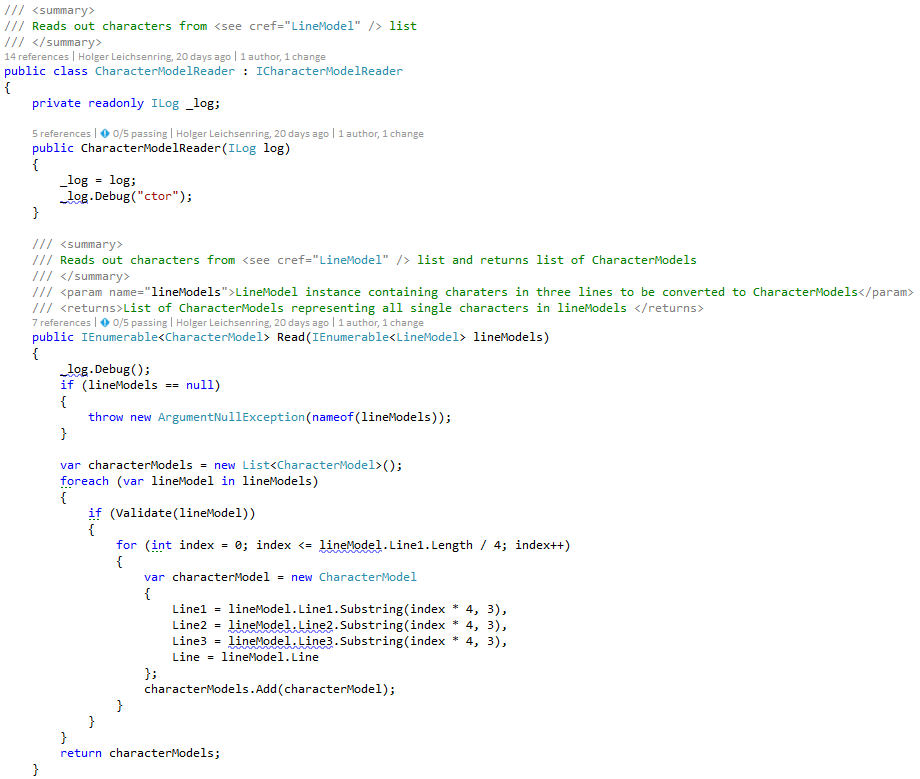 Again, pretty simple. Please do not value the single lines calculating the number of iterations, and how to get out the correct string. Certainly, from the maintainability, readability perspective as well as the defensive coding perspective this can be improved a lot. Anyway, again very simple code just reading out the characters from the model. I actually thought instead of method “Read” in a “Reader” component a converter would have been also appropriate.

As you may recognize, I didn’t get out of my comfort zone. I didn’t do TDD. I just write the small pieces of my program and wire them up. Let’s summarize that later on, I would anyway put your attention onto the fact that I implemented interfaces in both classes. When implementing interface there should be a reason. This is usually the fact that the same contract is used by at minimum more than two parties. When it comes to automatic testing, especially in the environment of dependency injection this is going to be a problem. Because the code needs to be changed because of automatic testing.

The code needs to be changed because of automatic testing. Anyway.

As said, this is not a problem of TDD but of automatic testing. I don’t want to put an empty ctor in the class, neither I like virtual methods in all classes too much to have the possibility to do sensible mocking of the classes when doing automatic testing of behavior and functionality. So the interface looks like the smaller price. Anyway this is a price to be paid, otherwise the automatic tests will be much more complicated to set up and maintain.

The next step is to convert the data in these models to “CharacterDefinitions” replacing the pipes, underscores and spaces by zeros and ones and create a single line out of it. 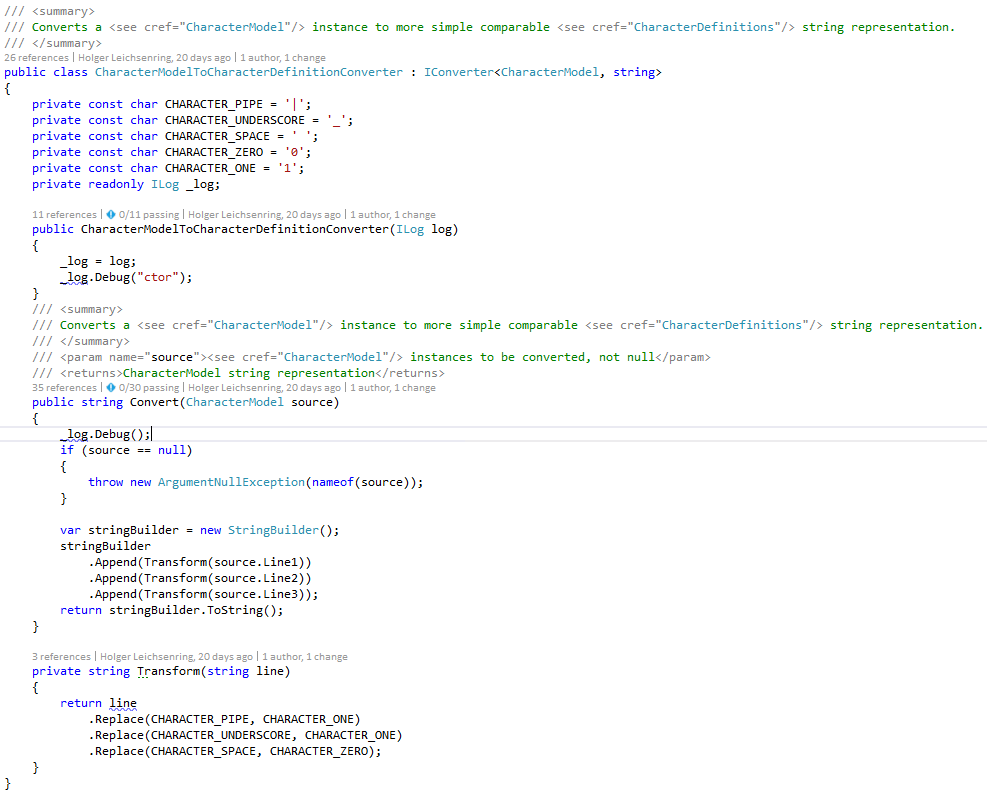 Talking about naming conventions, people tend to name constants differently, the same applies to strategies about logging. Let’s not go into the details about tastes, philosophy and get religious about it. I personally do perfer certain strategies because they worked well for me and the teams, but finally always the team decides, not the architect.

There are just two parts missing, the conversion from the character definition to the “real” number and actually putting together all the single pieces and let it work. You can have a look onto the conversion here. Directly moving forward to the “OcrProcessor”. Here we go: 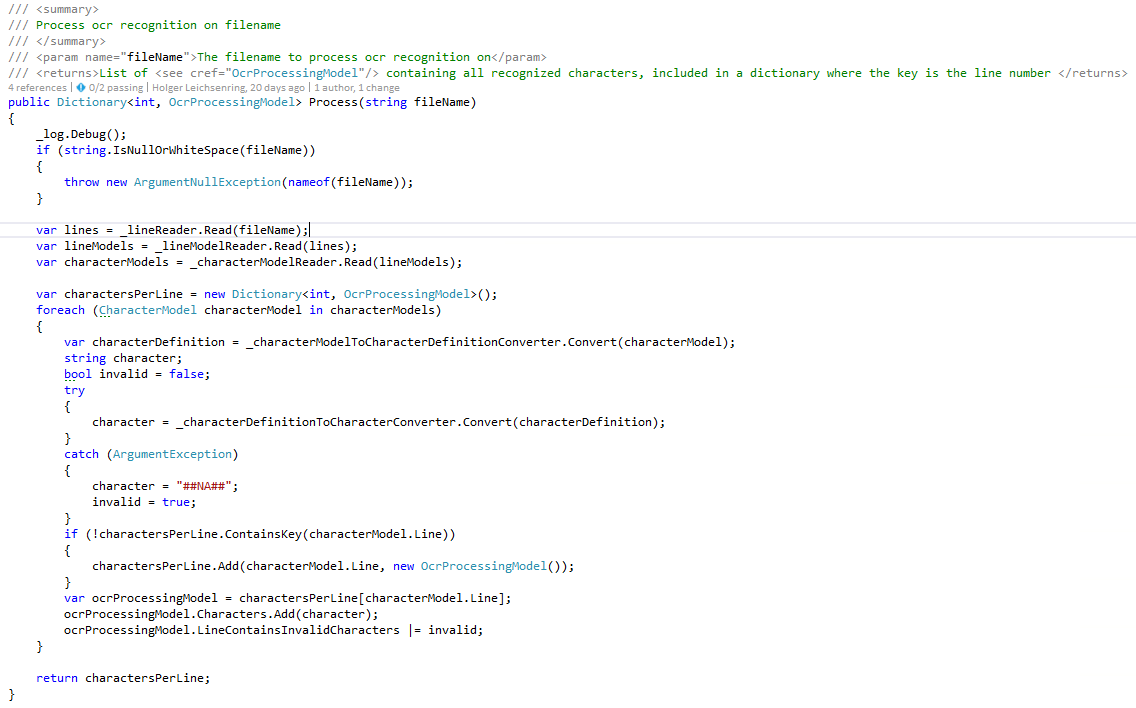 Putting all the functionalities together, the procedure is pretty simple. Getting all the lines from the file, reading out the Line Models. Afterwards reading the CharacterModels from the Line Models and then converting each CharacterModel to a CharacterDefinition.  The final conversion from the CharacterDefinition to the “real” number is done within try catch as failing in this particular point is part of the task and needs to be communicated to the caller. Another model, the OcrProcessingModel is set up for every single line, numbers are added to that. Results is a list of characters per line plus an indication if there have been any unexpected/ faulty characters in a line.

My program is now moreless completed, but what about the tests? Starting with the data let me move to some kind of bottom-up implementation. When the data definition has been finished I just started with the most simple functionality filling up data and moved up to the ocr processing where I can simple assembly all the single parts.

No single test written up to now but the program is completed. Anyway, let’s have a look onto the tests I wrote afterwards. 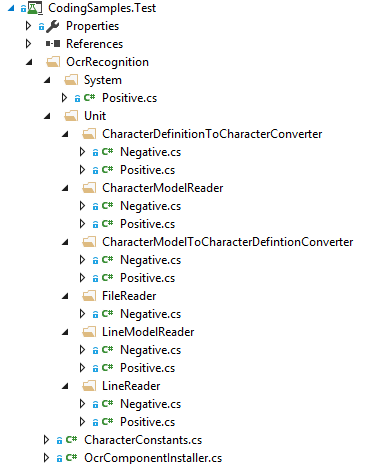 I did two different kinds of tests, system (aka “integration”) tests, where the whole program is going to be tested if it does work correctly as well as unit tests. Tests are mostly separated into Negative/ Positive tests. This could also be done in a single class but from my point of view it is valueable to directly see in the file structure of the tests where I check for expected expections and where I do expect properly working functionality. Have a look onto the github sources.

Again don’t expect to have comprehensive tests. Anyway if using TDD or not on one hand I don’t think that 100% coverage is an effective strategy. People tend to loose focus onto the functionality that is important to test by replaceing it just but  the pure number of tests. That may feel well, but very focussed tests (read as: the right tests) telling the real story while they aren’t so intensive in maintaining are much more valueable. On the other hand it is very easy to just overlook the necessary tests anway, so actually the developer needs to know what the program is all about and do the right thing.

Not going too much into the details of the tests I’ve written, the real differences between the procedure I took and TDD are

Do you see more differences? Would it be correct to say that people anyway tend to be different, so for one team TDD does fit perfectly because the members of the team want to have the top-down procedure, because it does fit more to them. While another team likes to do it the way I did, thinking about the data and program at first and caring about tests afterwards? Does it make any different in terms of the quality of the developers applying one of the strategies?

Is TDD with top-down strategy more efficient than starting with the data and implement bottom-up?